Shahabinary is a OS free, freeware PC application which is at least runable on Linux & Windows 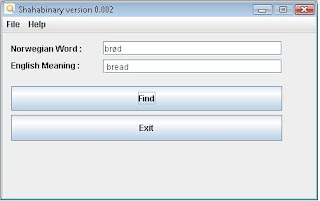 (TESTED). The code is not open source this time (like Shahabinary 0.001) but I will post the source code in near future. Due to some technical difficulties with GUI, the word recognition ability has been disabled but will be functional again in version 0.003. This version enjoys a better GUI and much more comfortable design with significant changes in the code which makes it smaller and easier to compile. The only thing you need to do for running is to unzip the folder and double click on Shahabinary v. 0.0002.jar.

Again I repeat the words and database are not trustable and this is just an exercise in my learning progress. This project the focus is mostly on the technical part and not the dictionary parts of the application.

Opening text file in word from a java program

How to run an exe file from java

If you want something which you do not need to read much about it but it is old :

will spawn an external process (usually a program written in some language other than Java) that runs in parallel with the Java execution. In W95/W98/Me/NT/W2K/XP/W2K3, you must use an explicit *.exe or *.com extension on the parameter. In Vista it will still work even if you leave it off. Be careful to include it, or your code will mysteriously fail on the older operating systems.

It is also best to fully qualify executable names so that the system executable search path is irrelevant, and so you don’t pick up some stray program off the path with the same name.


ATTENTION : Starting with JDK 1.5, exec has been replaced by ProcessBuilder. start. You should likely not be using exec for new programs. However, studying exec is useful to understand old programs that use exec and to understand why ProcessBuilder is designed the way it is. They have many things in common, especially the way command interpreters and internal commands must be handled, and they both use the same Process class. So read about exec first, then enjoy the improved ProcessBuilder.

// You can reuse the ProcessBuilder objects.
// They retain their initialisation.
Process sister = pb.Start();


SOURCE
Posted by Shahab at 2:13 PM No comments:

Well this code helped me reading Persian language characters from a text files.

short answer : add this code to the constructor ...
Posted by Shahab at 10:21 AM No comments:

Finally after a long delay because of my exams the Shahabinary dictionary alpha version 0.001 probably full of non discovered bugs with very little amount of words is ready to download for coders. This dictionary is coded in Java and is a open source free Norwegian to English dictionary. I hope this is my first step toward the next better versions of this dictionary specially from Norwegian to Persian and the other way.

Wish me luck and enjoy...

Shahab.
Posted by Shahab at 2:57 AM No comments:

How to make an iterator for a Hashmap in Java

Iterate through the values of Java HashMap example :

Posted by Shahab at 2:31 AM No comments:

My name is Shahab. Here in this weblog I share my experiences and knowledge about computer science with others, so maybe I can do my part to stop re-inventing the wheel ;-) I have also one corresponding weblog in Persian language. I would be happy to receive comments, if what you find here can be useful in any ways :-)